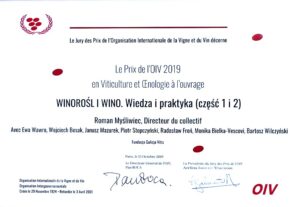 The Foundation for the Development and Promotion of Viticulture® was brought into being in 2014 and its goal is:

The name of the Foundation refers to a historical region of Galicia which formed the biggest province of the multinational Habsburg Monarchy. Galicia was the place of great national and religious changes and a common homeland of Poles, Ruthenians, Germans, Jews, Armenians, Karaites, Moldovans, Czechs, Hungarians and the Roma.

One of the Foundation’s actions taken to pursue the above-mentioned objectives is to organise the International Wine Competition GALICJA VITIS®. In this way, we have been trying to cultivate the multinational wine traditions of former Galicia by strengthening friendly cooperation of the winemakers from all over Central Europe, who have been closely connected for ages with rich wine traditions and trade in wine.

The Polish word “herb” / English-“emblem”/ comes from the Czech “erb”, which in turn comes from the German “Erbe”, which means “heritage”. Emblems reached Poland in the 13th century, probably from Germany and the Czech Republic through Silesia.
The Polish lands which were joined to Austria as a result of the partitions, named as the Kingdom of Galicia and Lodomeria, became one of the crown lands of the Austrian Habsburg Monarchy after 1849.

The name “Galicia and Lodomeria” commonly shortened and called “Galicia”, came into usage after the first partition of Poland. It was when Austria got the lands of Red Ruthenia with Lvov, Przemyśl, Sanok and Beltz, the southern Lesser Poland with Oświęcim, Tarnów and Nowy Sącz, as well as the western part of Podolia (Tarnopol, Zbaraż) and a part of chełmsko-włodzimierski land with Zamość. Galicia was the place of great national-religious changes and a homeland of Poles, Ruthenians, Germans, Jews, Armenians, Karaites, Moldovans, Czechs, Hungarians and the Roma.
Our Foundation in its actions appeals to the wine traditions of the Kingdom of Galicia and Lodomeria. It also takes an example from the multinational culture prevailing in that historical region. The reviving wine tradition in Poland origins from its neighbouring countries – Slovakia, the Czech Republic, Hungary, Austria and Ukraine, so basically the old areas of Galicia.
The new emblem of Galicia and Lodomeria was created in 1804. It showed a red strip (the colour of Lodomeria ) in the azure background, a crow sable above the strip and three ancient gold crowns below (the coat of arms of the Archdiocese of Krakow). The new emblem showing a crow sable was to refer to the Halickie Principality. In our modified version of the emblem of Galicia , the heads of grain and cornflowers surrounding the royal crown were replaced by grapevine as a symbol of the wine traditions preserved on that region.

Any cookies that may not be particularly necessary for the website to function and is used specifically to collect user personal data via analytics, ads, other embedded contents are termed as non-necessary cookies. It is mandatory to procure user consent prior to running these cookies on your website.